Welcome to Buffalo Butte Ranch! We are only 29 miles from Winner South Dakota, the mecca of South Dakota pheasant hunting. Hunters flock all over the US to visit Winner, SD the well known Pheasant capital of the world, right in the heart of the famed South Dakota "Golden Pheasant Triangle".

How big is pheasant hunting in Winner South Dakota?

From Wikipiedia - "Winner is very well known for its pheasant season. Pheasant season runs from October to December and brings many individuals from throughout the United States." [Source Link]

The Winner South Dakota area is filled with celebrities, sports stars and company executives who come out for the thrill of the South Dakota pheasant hunt.

Foreigners all over the globe have heard of Winner SD for it's pheasant hunting. I've traveled from Mexico to Europe and talked with several people and a good number of them can't point out Winner South Dakota on a map, but they have heard of South Dakota for it's Pheasant Hunting! Once I sit down and explain the bird numbers in Winner and the golden triangle, we have them drooling to come and visit us.

News Reports in the Mainstream Media

Some reports like this are complete rhetoric. The bottom line is, if the farmer/rancher manages the acres properly, those reports just don't mean anything. However, some out-of-state pheasant hunters take them for face value. At Buffalo Butte Ranch, we encourage you to not believe it. Here's why. We have had our best pheasant population seasons when the state of South Dakota says their are the least amount of birds. The bird populations just don't matter in the state, especially since we are in the golden triangle in Winner - Gregory - Chamberlain South Dakota.

We are not far from Winner, SD. We are north of Gregory and just east of Winner. Our pheasant hunting lodge and outfitting service appeals to a lot of groups because we are not in Winner or Gregory, but right in between, giving individuals plenty of choices for entertainment and nightlife. In fact, Dallas is only a short 15 minutes from our lodges. So we think we have the perfect location! 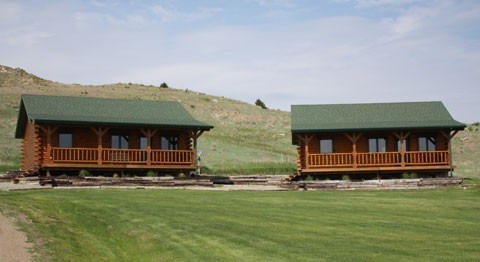 We are a family run operation, we run smaller groups, we provide upscale, luxury lodging and provide personal service. Take a look at our why us page or view our South Dakota pheasant hunting lodges.

Take a look in one of the chalets and you can view the kitchen, dining & great room. It has two bedrooms that sleeps 4-5, bathroom, fireplace, living area, big screen TV with satellite, wireless Internet, and a full kitchen. The chalet is appropriately decorated with local taxidermy and western art.

What makes Winner even more appealing to some corporate groups is the airport for private charters. Fly right into Winner SD and it's only a 30 minute drive to Buffalo Butte Ranch.

Why Mess Around, Book with Buffalo Butte Ranch

You could compare Winner South Dakota Outfitters all day. Why not just give us a call at Buffalo Butte Ranch and let's talk about coming out to pheasant hunt with us for that dream hunt you deserve.