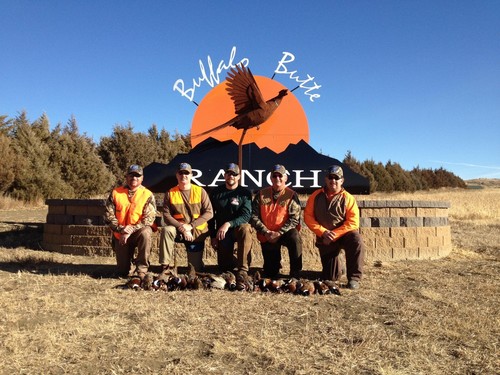 A few days ago we were host to another group of guys who were new to Buffalo Butte Ranch and wanted a taste of the wild birds that South Dakota has to offer. Like many new groups that arrive here for the first time, they weren’t sure of what to expect when they pull into the driveway to the lodge for the first time. Fortunately, any concerns they may have had were put to rest when they walked into the lodge and experienced first-hand that they had arrived at a first-class operation.

Once again, we did our best at ordering in some really great weather for this early Dec. hunt. With beautiful blue skies and a plentiful bird population still residing on our property the hunt couldn’t have been better. Brian and his friends showed up with some good shooting skills which made quick work of their birds each day.

I have seen many birds get shot while guiding here at Buffalo Butte Ranch and Buffalo Butte over the years. I see some good shooting, some poor shooting, but every once in a while I witness a truly great shot. Many hunters ask me what the best shot I’ve seen was and my answer usually surprises them. A few years back a husband and wife came out for a hunt that I had the privilege of guiding and the lady pulled off a truly amazing shot (or shots). She was shooting an over/under 28 gauge because she was undergoing chemo and couldn’t withstand the recoil of other gauges. In one instance while she was blocking I witnessed her pull off a hat trick! That’s right, 3 birds up, 3 shots fired, and 3 birds down. With a 28 gauge over/under! She showed us that women can definitely shoot with the best of them.

But now I have a new story to tell. While guiding this last group Ed pulled off another shot that I had never seen and deserves to be put into writing. While walking a food plot strip my dogs busted up a flurry of roosters at close range. With just one squeeze of the trigger of Ed’s gun two roosters dropped! Ed literally killed two birds with one stone (or 12 gauge shell)! It took a moment for it to sink in of what actually just happened but sure enough my dogs brought back two dead roosters and Ed showed us what an ear to ear smile looks like. 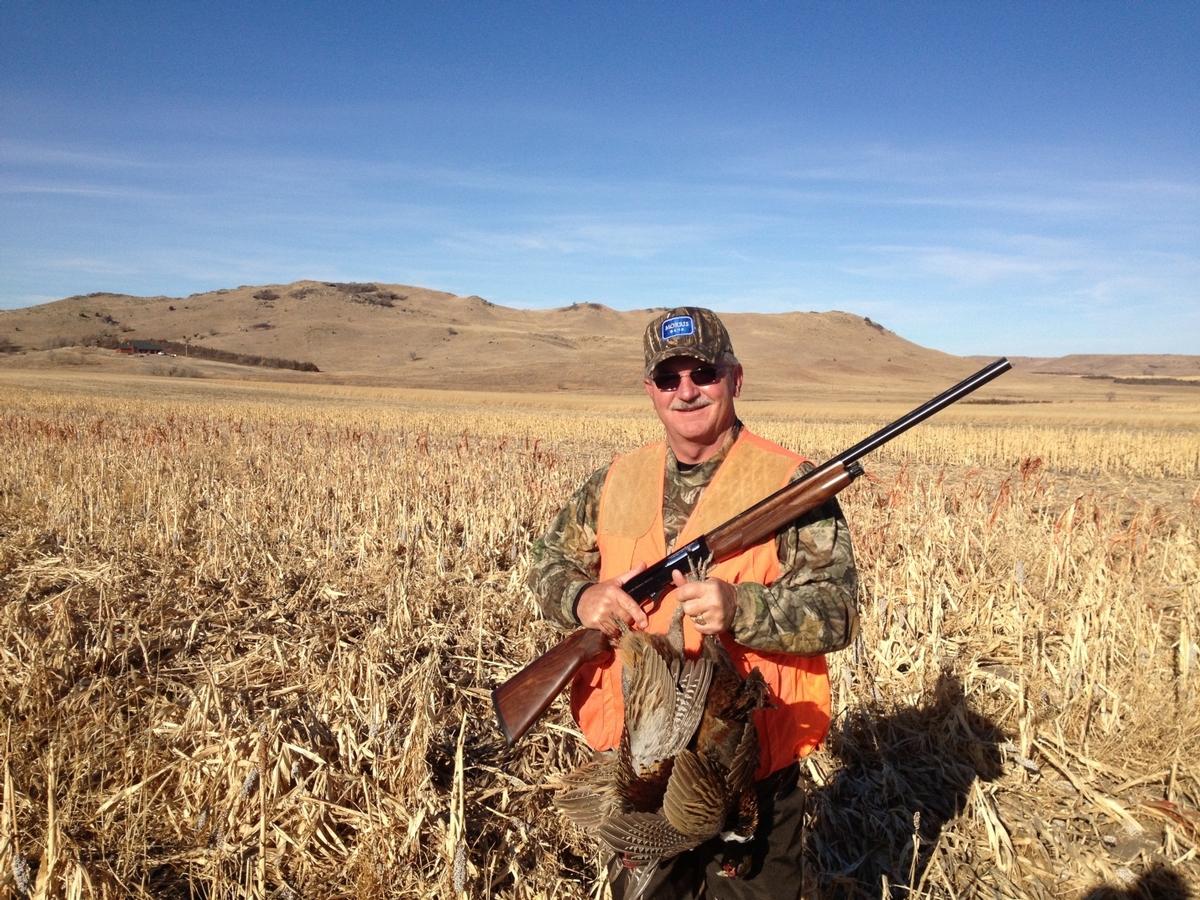 Not only did he get these two birds with one shot, but that was also the final two birds we needed to get our limit for the day. Not a bad way to cap off a great hunt on such a beautiful December day if you ask me. These guys were even nice enough to help me out with me getting my limit as well as we finished out the food plot strip.

The hunt both days went very well. The weather couldn’t have been better and the birds were abundant even this late in the season. Brian and his group were a fun bunch of guys to be around and as a guide I had a blast taking them out. 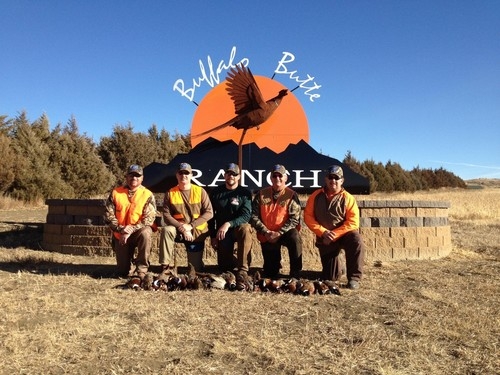 As with any upside, there usually is a downside. And unfortunately that truth reared its ugly head over the course of the hunt. At the end of the first day of hunting one of my dogs, Piper, nipped at my other dog, Ruger, over some kennel space and consequently I had to make a trip to the vet’s office. Just a little cut on his cheek, but it required some stitches. He is all but healed up now like nothing had happened so there is no need for anybody to send him get well soon cards. 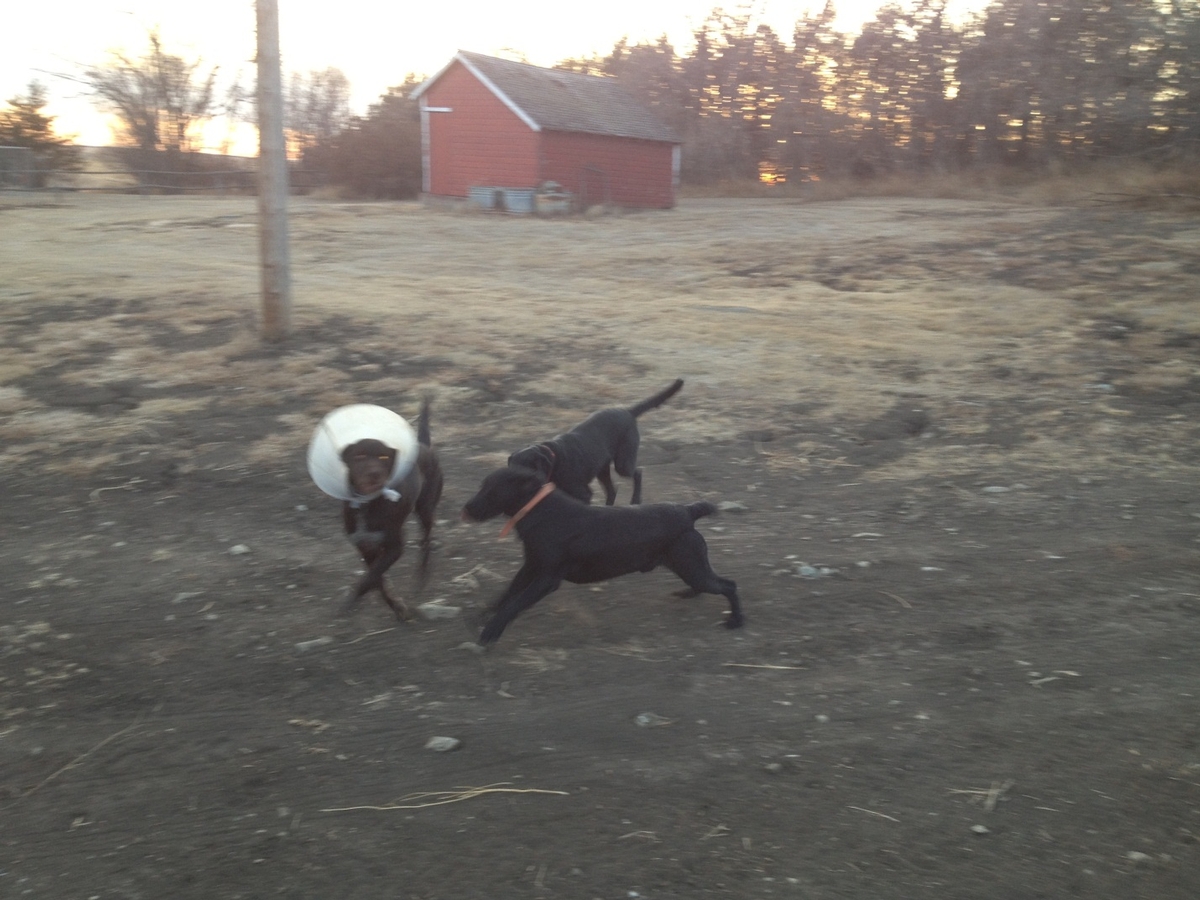 (Can you guess which one is Ruger?)

The trip to the vet’s office was just the beginning of a series of unfortunate accidents out of anybody’s control. While at the clinic I received a call that from my mother (Colleen) that there was a fire right behind the lodge! It was a frantic and panicked voice on the other end but I could make out just enough to know that I needed to get back as soon as possible. What I had found out shortly after was that fire departments had been called and there was a grass fire behind lodge. The wind was thankfully pushing it away from the lodge but there was another establishment that it was heading towards. As I was driving from the town of Winner to the lodge I could see a huge plume of smoke in the distance. From that vantage point it looked like there was going to be no saving the structures it was heading towards. As I arrived back at the lodge I saw that it was just grass that was burning but it was still moving rapidly over the hills and burning quite rapidly. 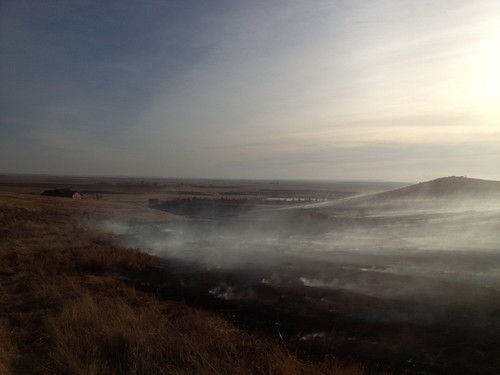 Due to our extreme dry weather we’ve had over the summer and fall it was incredibly easy for a tiny spark from anywhere to set off a full blown prairie fire. Fortunately our local volunteer fire departments are very good and fast at responding and they were able to get out to our location and extinguish the flames before it caused any structure fires. Also, while I was away we had so many great, quick thinking neighbors and hunters at the lodge to help with all the chaos going on around us. Thank goodness Brian, one of the hunters at the lodge, had the foresight to call 911 in the fire’s early stages! That simple move alone might have been what made things go so much more smoothly.

At the end of the day and after a few beers I was able to think back to the day’s events and realize just how lucky we were. First off, Ruger’s cut was very close to a main artery that didn’t get cut and if it had, the situation could have been far more dire. Secondly, the fire had only burned grass. With a little rain it will be greener than it had ever been before. If the wind was blowing a different direction or just a little bit stronger there is no telling how much damage it could have caused. It’s easy to get caught up in the negatives but you really have to step back and look at just how blessed you really are.

P.S. In case anybody was wondering how the fire started, it was due to a .22 bullet ricocheting off of a target and into some grass that sparked the fire but I’m not telling who it was. It was a complete freak of nature accident but we definitely had to do some hazing afterward!