Once again it is the time of year here in South Dakota when pheasant hunters from every corner of the country come in to Gregory to find ample pheasants for the famed South Dakota pheasant opener. Here at Buffalo Butte Ranch we were fortunate enough to host a group from Texas for the 3rd straight year. After a few days of strong winds the weather calmed down over the weekend and opened up for a great hunt! We couldn’t have asked for better weather and the birds were out in full force as well.

The first day of the pheasant opener start out with Susan Styers bringing down a very colorful rooster. That’s right guys; these women know how to shoot! It didn’t take long to make it through a few walks and get halfway to our limit in time for lunch. 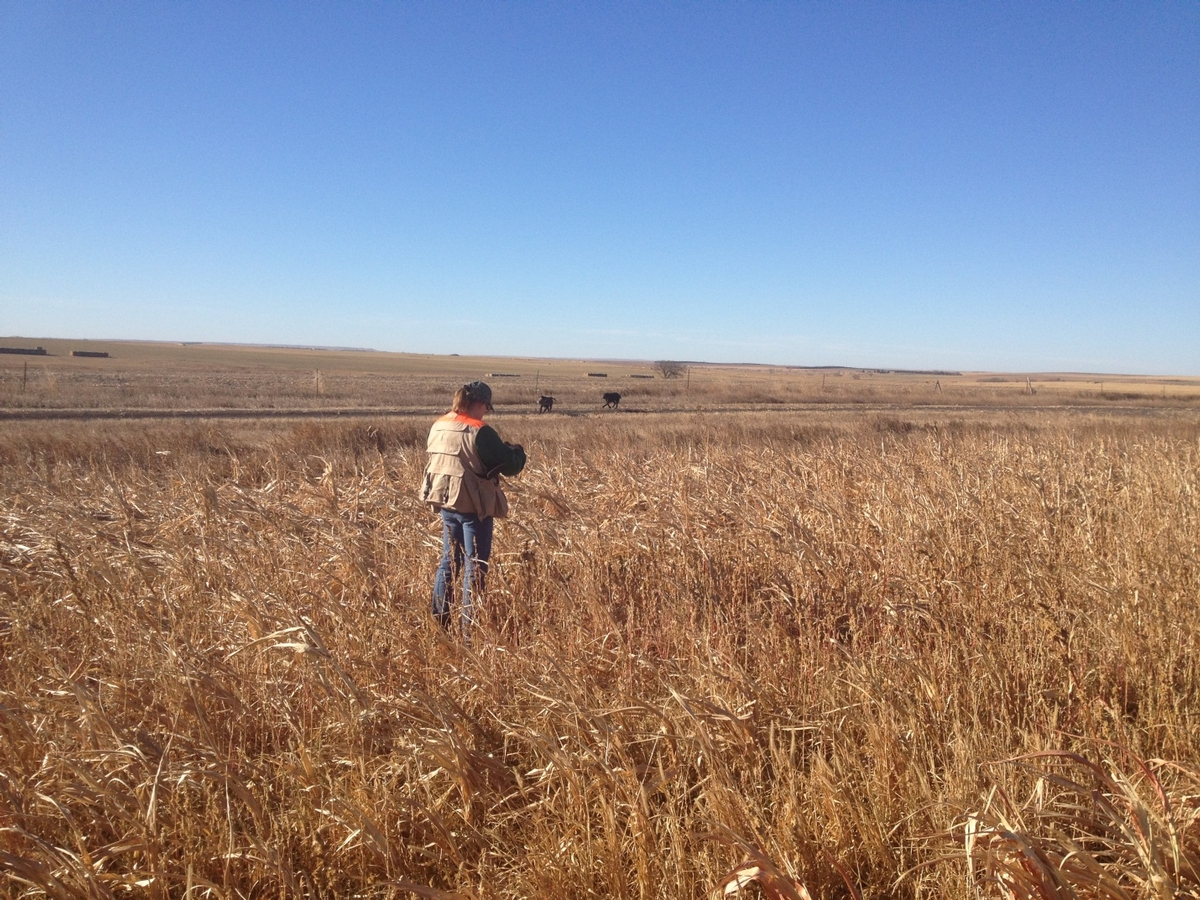 (Susan reloading after bringing down the first bird of the season! Great way to start out the year.)

By lunch time the temperature outside was around 60 degrees with very little wind blowing around.  The weather couldn’t have been better out to kick off the pheasant season here in South Dakota. After guiding for many years I can honestly say that opening weekend can bring out just about any type of weather South Dakota can throw at you. Fortunately Mother Nature decided to cooperate with us. Just a few days prior to the opening weekend the wind was blowing about 60 mph! That would’ve made the hunt a touch more interesting if it had kept up I’m sure.

After lunch we went on to hunt some of our tree belts and food plots next to the trees which we knew were full of birds. After each walk I would take the dogs to a nearby watering hole to cool them off and keep them energetic. Doing this keeps the dogs from becoming fatigued and worn out too early on in the day. Especially now that the temp was in the mid-70s it was important to take these breaks. 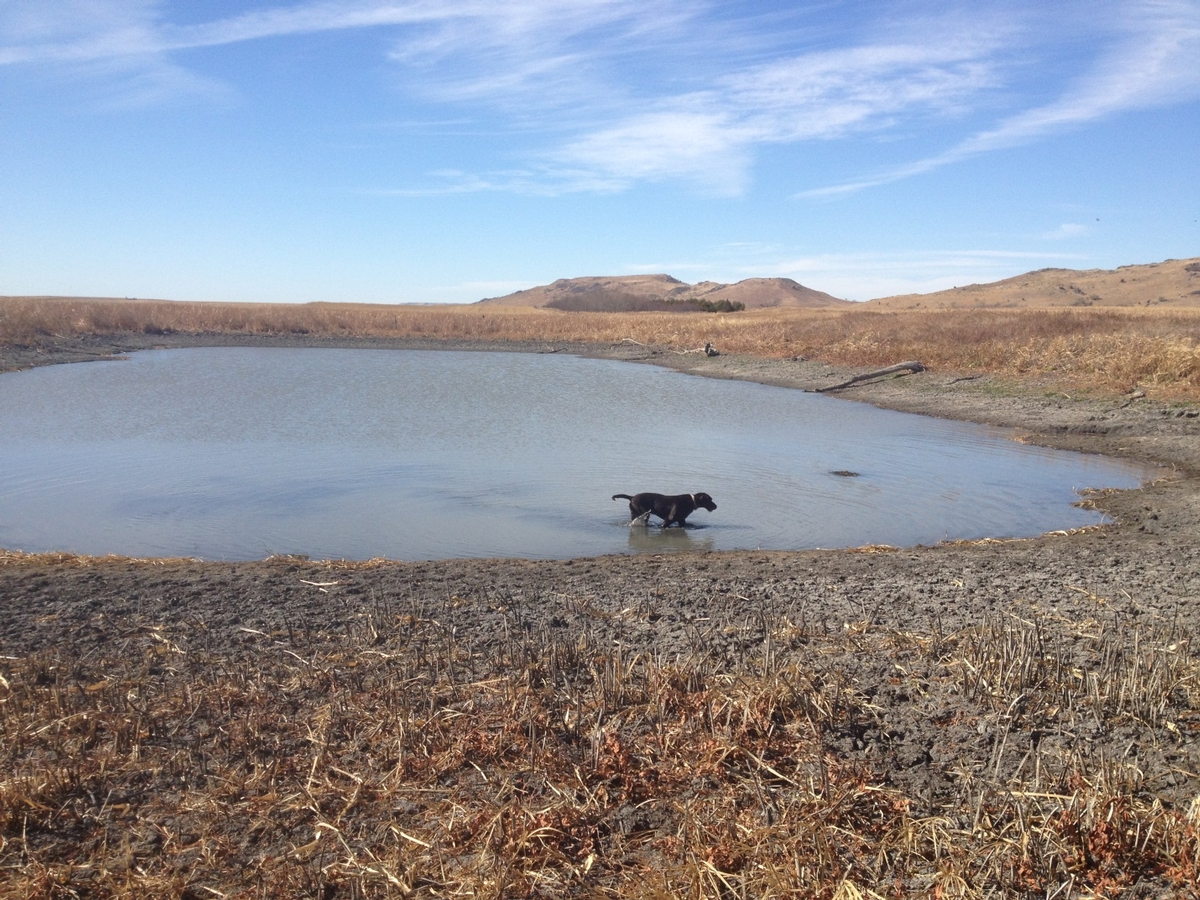 (Ruger cooling off after a walk through a food plot strip)

When we started walking the trees we knew there would be quite a few roosters hiding out so expectations and ammo counts were high. The trees offer a different style of hunting that can’t be found in food plots or draws. The action is usually fast and furious inside the trees. We had many pheasants fly away way out in front of us which is always fun to see but fortunately there were many that stayed in tight. The blockers got some good shooting there as well. Thank goodness the dogs were on the top of their game because there were quite a few retrieves that were needed around the trees as the birds kept dropping! 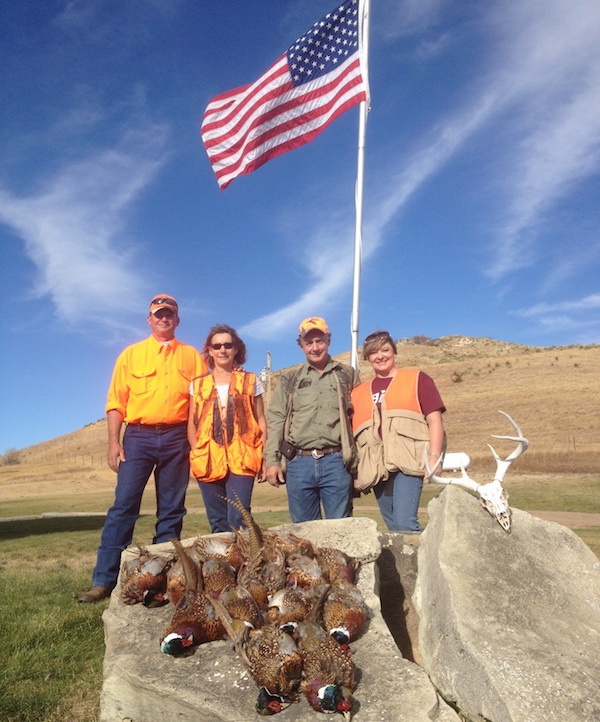 The result of coming out to South Dakota for wild birds is always a full limit of some of the most beautiful game birds there is to hunt. It is always a pleasure hosting the Lewis and Styers here at Buffalo Butte Ranch for opening weekend of pheasant season. It’s always nice to get the girls out shooting and proving that it isn’t just a man’s sport! We can only hope for the weather to be as good all season long. After getting out and hunting our land I can rest assured that there will be plenty of birds out there for many groups to come.