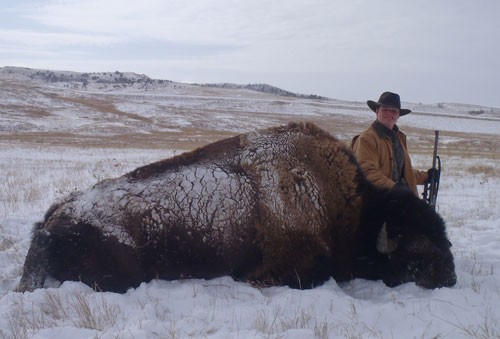 February 19th-21st we had the privilege of hosting one of the hunting communities finest up and coming young stars, Scott Smith Jr. with his father Scott Smith Sr.

With the buffalo hunt scheduled for Monday the 21st we had a few days to do some sighting in, coyote calling and pheasant hunting.  The bird numbers were impressive to say the least but due to the snow and the fact that they have had a season of eluding hunters they were a challenge. 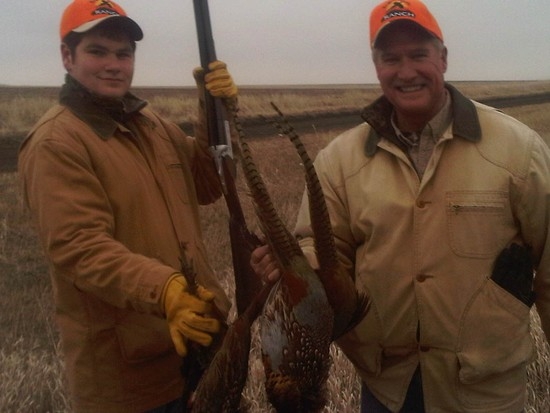 15 year old Scott's relentless pursuit prevailed and a limit of roosters were taken both days. The coyote calling was another story. The cold temps made for short hunts both times we went out.

Monday couldn't come soon enough with the anticipation of the trophy bull hunt. The bull was located in a good shooting area and pretty much by himself.

After maneuvering to a 150+ yard position Scott sent a round from his .375 Merkel side by side into the bull's vital area. The 300 grain Barnes Triple Shock hit it's mark but made little visible impact on the 1800+lb bison. The next shots were from the 200yd range and true to their mark which proved to be more than the massive bull could endure. 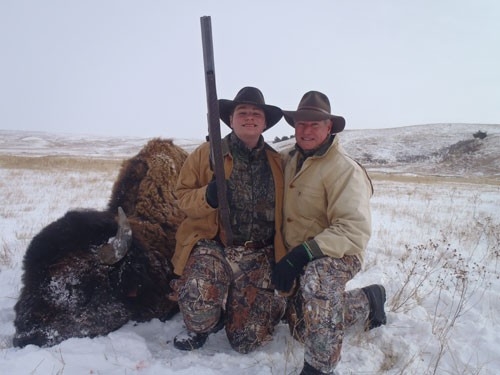 Closer inspection of the bull revealed how massive he really was. A fine trophy for a fine hunter.

Thanks guys and we look forward to following your future hunting accomplishments.