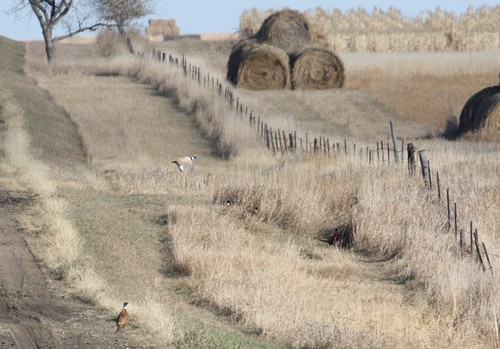 Pheasant populations have been reported from the South Dakota Game Fish and Parks as a decline across the state with the harsh winter. However, driving around the ranch at Buffalo Butte Lodge pheasant numbers appear to be good as usual. We are excited for another year of pheasant hunting and look forward to meeting our new groups for 2011. We have a few slots available, so call for availability.

Pheasant brood counts indicate that pheasant numbers in South Dakota have returned to levels below the remarkable high counts of the past few years.

However, the pheasant population in the main part of the state's pheasant range will still provide quality hunting opportunities.

"We observed abnormally high mortality of hen pheasants during the brutal winter of 2010-11," explained Jeff Vonk, Secretary of the South Dakota Game, Fish and Parks Department. "The loss of that reproductive potential inhibited the ability of our pheasant population to rebound to the record levels that we have enjoyed in recent years."

Declines in the counts were consistent across the state and most pronounced in eastern South Dakota, where winter's grip was tightest and grassland nesting habitat is diminished.

"We knew this day was coming when important pheasant habitats provided by the cover in Conservation Reserve Program fields were lost," Vonk said.

CRP enrollments in the state are currently at 1.17 million acres, down from 1.56 million acres in 2007. The reduction equates to over 600 square miles of grassland habitat.

"On the other hand, we were pleasantly surprised how well pheasants responded in central South Dakota, where abundant moisture from winter snow and spring rain allowed grasslands to flourish and provide the essential habitat for excellent pheasant production," Vonk said.

"All things considered, pheasant numbers in much of the traditional pheasant range of the state are still good despite the declines in the counts," Vonk said. "Much of South Dakota will continue to provide a premier opportunity to hunt pheasants."

The complete 2011 Pheasant Brood Survey Report, including local survey results for different areas of the state, can be found online at http://gfp.sd.gov/hunting/small-game/pheasant-outlook.aspx