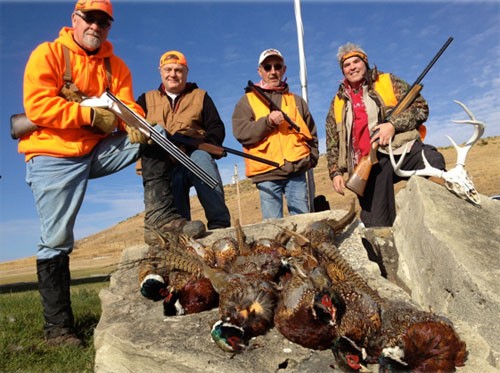 Back in July 2012 I received a phone call from a guy from Nebraska looking for an upscale lodge for him and his 3 friends. He went on to tell me that he had grown up in Nebraska and that back then there were pheasants everywhere. Limiting out was never an issue. But nowadays, due to all of the different farming practices and lack of nesting cover the birds have diminished to such low numbers that it just isn't fun hunting there anymore. Well after a long conversation about pheasant hunting and our lodge he had decided to book a pheasant hunt with us. He and his group had many questions for me which I was happy to answer. This was their first time hunting with an outfitter and they wanted to know how the hunt was set up and all about the operation in general. It's always a good idea to ask as many questions as you can to an outfitter whom you've never done business with. You can sometimes weed out somebody who may not be the right fit for you and your group this way.

Well fast forward 5 months later and Mr. Keating and his friends have made their way up to Buffalo Butte Ranch for a couple of great days of hunting. It didn't take long before the first bird had hit the ground and made its' way into my bird bag. 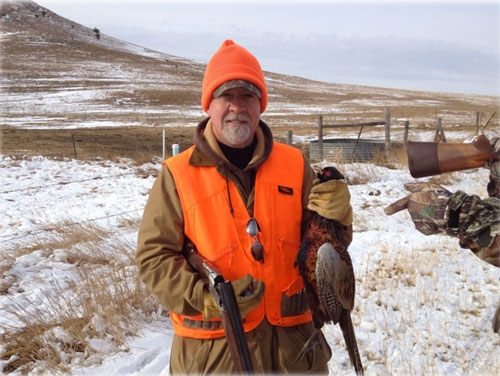 Because there were 4 hunters, we were able to hunt with 2 walkers and 2 blockers with every walk which seemed to be the ticket to getting our limit quite handily each day. The ground was still a bit soft and sticky so the birds had heavy feet and were more apt to run than fly so blockers were a must. 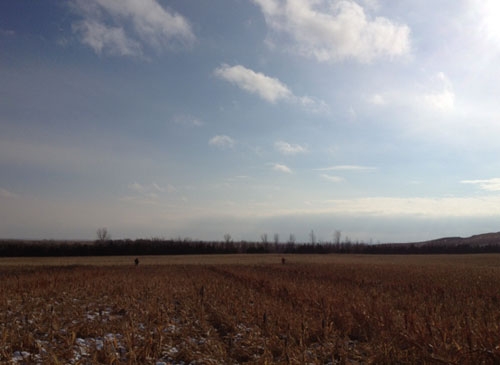 (Blockers at ready to pull birds from the sky)

By lunch time we had 7 birds of the limit of 12 in the bag. We were working the property in a way that pushes all of the birds to the center and those center strips were what we were going to be walking after lunch. Shortly after lunch we were back at it and started to see quite a few birds in the corn strips. Within one walk we only needed 1 more bird to finish out the day. Now I've been guiding for quite a few years and I can tell you that the last bird is always the hardest one to get. We walked a few more strips and seen some birds get out ahead of us or close to us but flew too low to take a safe shot. I told these guys about the last bird being tricky to get before lunch and they couldn't imagine why. It didn't take long before they believed me about that fact! But alas we walked through a food plot strip that got us our limit before too long. 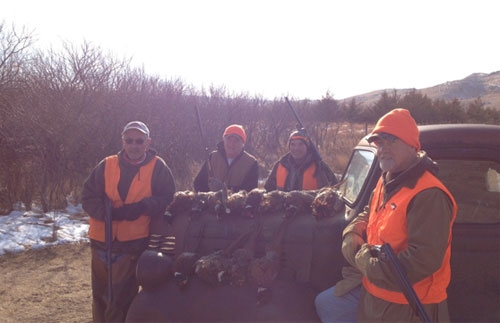 The second day started out like any other. I got to the lodge around 7:30 and started up the coffee makers and griddles. The one thing that was different about this day was the amount of fog that had rolled into the area overnight. All of the forecasts and predictions said that it would burn off early on. Turns out that meteorologists aren't always spot on with their predictions! Other than the fog, it was gorgeous weather. No wind, upper 40's, moisture on the cover to hold the scent of the birds for the dogs to track. Perfect, except that you couldn't see past 100 yards! (this was abnormally thick fog) We walked a creek bed right off the bat because we figured due to the fog the birds would still be hunkered down in the rough cover. We ended up getting a shot at 2 birds but only bringing down one. It was so quiet and calm that you could really hear the wind generated from the wings of the fleeting birds getting out but couldn't see them which added a tricky yet fun element to the hunt this morning. 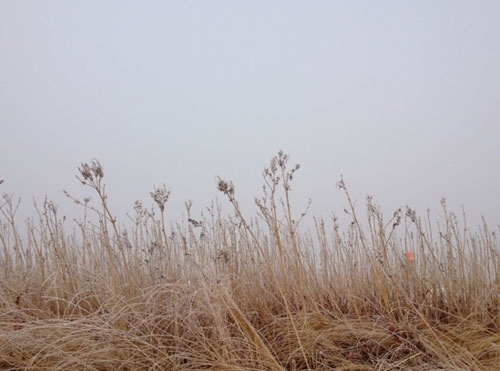 (Jeff walking on the edge of the cover through the fog)

The next walk we did was a corn strip right next to our bird sanctuary area. This is an area of our property that is centrally located to most of our hunting ground that we don't hunt. The birds know this to be a safe haven for them and it keeps them on our property rather than flying away. The amount of birds flying around was just staggering. It was a great feeling to know that you were surrounded by so many pheasants. Because the fog was so thick we could only see a small percentage of them but we could definitely hear them flying all around us. The sound of cackling pheasants in the mist all around you will never get old! 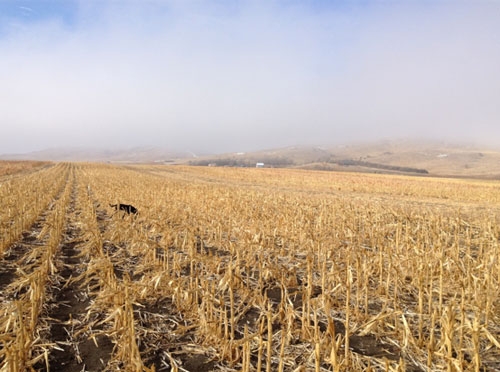 Thankfully the fog did lift and we started getting in more and more birds. We didn't have any problems getting most of the birds. Once again the last bird started to give us problems. We had a few opportunities at bringing it down but the rooster kept evading our shots we were putting in the air.  After noticing that the birds that were escaping us kept flying into some nearby trees we decided to take a stroll through them. Sure enough we snuck up on 3 or 4 more roosters and put the last one in the bag for a full limit for day 2. The guys had a blast and so did I! Happy hour seemed to come early for us each day since we were back at the lodge with our feet up by 4 o'clock both days. The guys could get a chance to sit on the deck and listen to the pheasants run around and cackle each evening after the hunt to really cap off some great days.

Before they arrived they did not know how our operation worked or what level of quality they were getting into. But it didn't take them long before they realized that Buffalo Butte Ranch here in South Dakota was a place they wanted to come back to. It's so incredibly reaffirming to have clients be happy to the point that they want to return the following year. I enjoyed every minute of it and also enjoy seeing guys back year after year. Once new hunters get here we strive to make it the best trip we can so they feel comfortable about coming back year after year. We are a relatively young business but our returning client base is growing each and every year. That to me tells me that we must be doing something right! 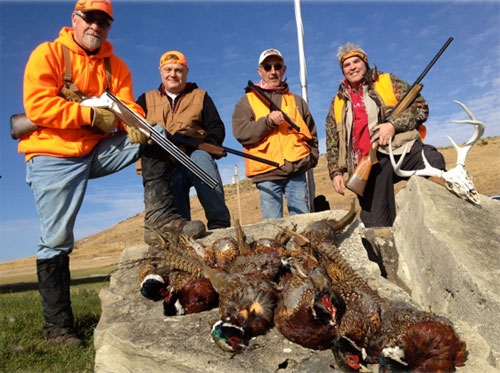