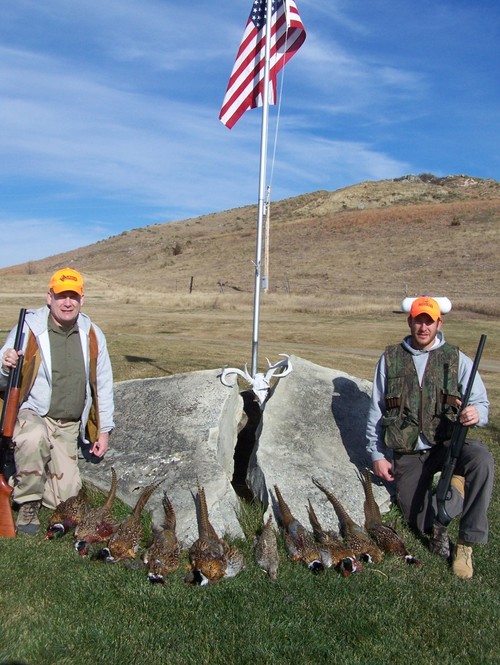 Four seasons ago in 2009 I got the opportunity to open up our land and lodge to a father/son group, Jeff and Kurt, and guide them for 3 days of some incredible pheasant hunting. We even managed to bring down a sharp-tail grouse, as you can see in the center of the picture above, in the process. They must have enjoyed it because they booked back, but their group number doubled over the off-season. Jeff and Kurt were joined with their friends Jim and Tom. Once again, they were treated to a great hunt and they went home with more good memories of hunting pheasants here on the Great Plains. And once again, they booked back, but this time their group was going to double in size once more! They just couldn’t keep all this fun to themselves. Jeff and Kurt’s father/son group had evolved into a group of 8 friends coming together once a year to kick back and let the worries of the world melt away while they create memories out here that will last a lifetime. Now let’s fast forward to this season and you can see how much this group has grown! The one constant over the years is the blue sky, but my how the bird pile has gotten bigger. 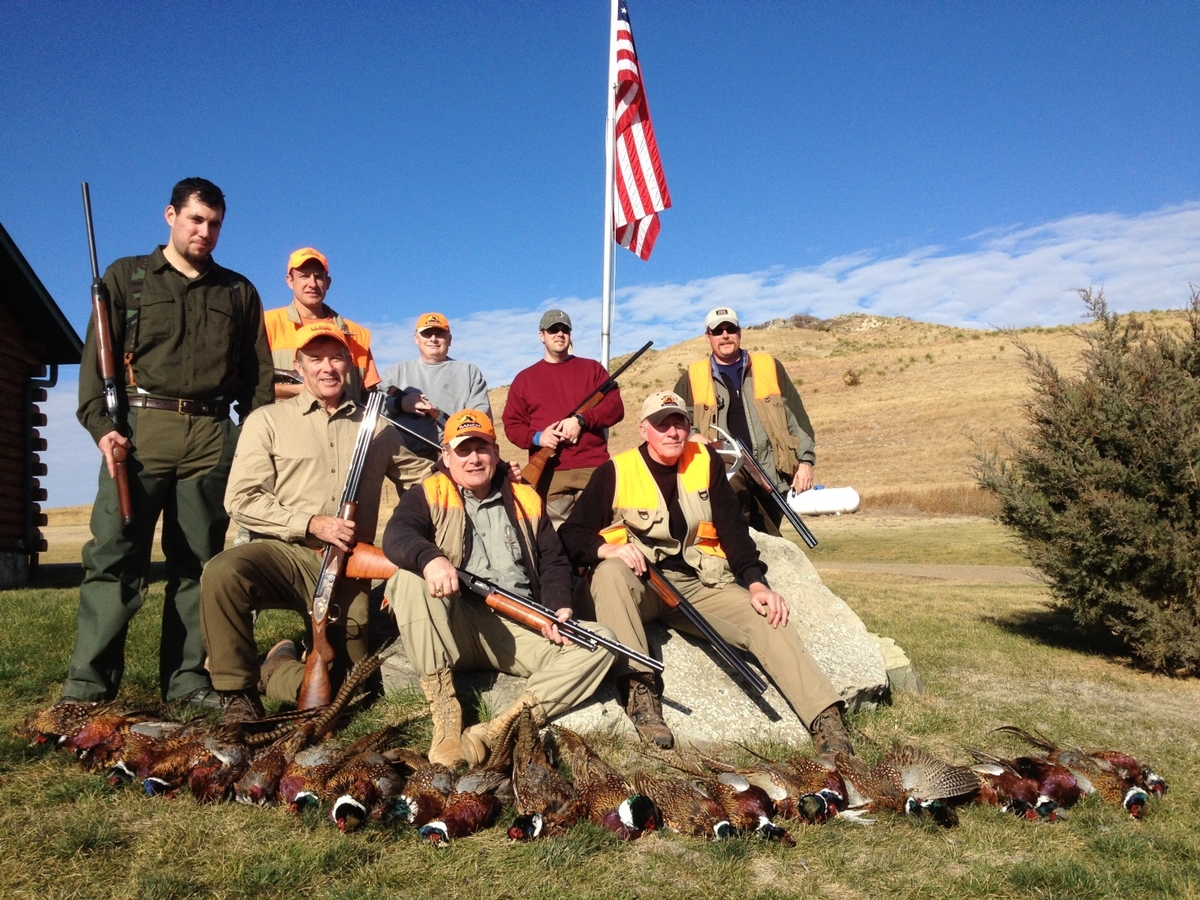 They arrived on Halloween this year and the weather couldn’t have been better for some relaxing on the front deck while the sun sets over the buttes to the west.

The next few days had some fantastic pheasant hunting weather lined up for us. It wasn’t sunny all the time. Actually, it was overcast most of the time. But there wasn’t any wind and the temps were just right for the dogs to work well and not get over-heated like they have been the first two weeks of the season.  On the first day we hunted some trees and CRP grass but noticed most all of the birds were escaping the reaches of the shotguns and headed towards an area on our property known as the sanctuary area. This area is a cattail waterway in the center of our property that we don’t hunt to keep the birds on our property. Well, the birds are getting too comfortable there and needed to be pushed out to the food plots and hunting strips.

With the help of a Ben, one of our other guides on staff that helped me out all three days, and his dog Bo we set out through the tall and tangled cattails to get these birds pushed out. Meanwhile, I had the guys stand all along the edges of one side of the sanctuary so the birds would fly the direction we were going to hunt that day. That was the first time we had walked through that area with dogs this entire year and boy were there a ton of birds waiting to be found in there! My dogs didn’t know what to do; they were so overwhelmed with scent all around them. 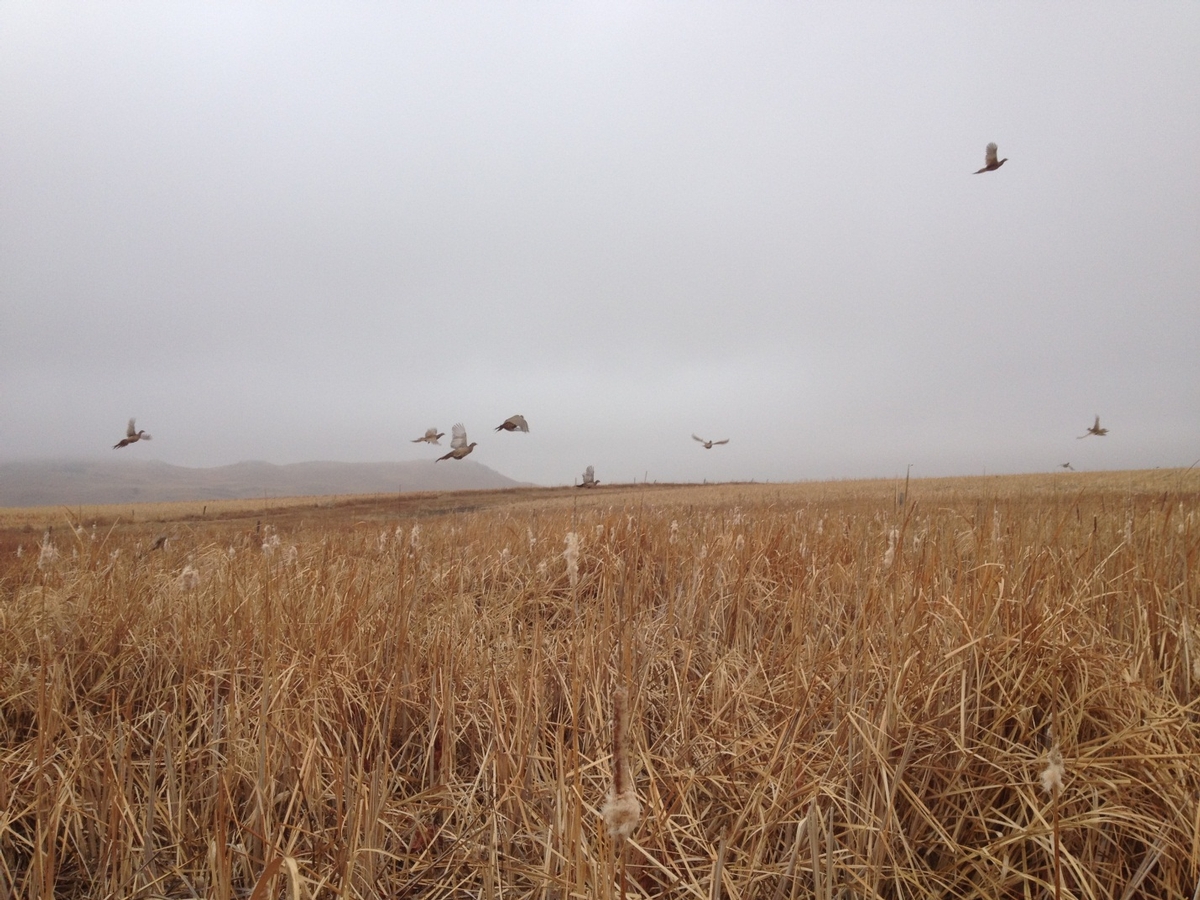 Once we got the birds out of their safe area the hunting progressed as it should. We started walking some food plot and corn strips and before long we were on our way to getting our limit shortly after lunch. Because of the larger group size, we were able to cover the fields quite efficiently without much possibility of the birds getting between us. It also helped to have Ben there with his dog Bo to aid us in the hunt. Another great thing about larger group sizes is the fact that we can send multiple blockers down to guard the ends of the strips so the birds don’t run out. For those of you who think that blockers don’t get any shooting, just ask Kurt. Not long after getting out of the vehicle on his first trip blocking this year he managed to bring down a nice double with his trusty over/under! Now that’s an impressive showing of marksmanship; two birds up, two shots fired, two birds down. That’s why I tell everybody to be ready to shoot at all times when not in the vehicle because you never know when these wild pheasants are going to flush! 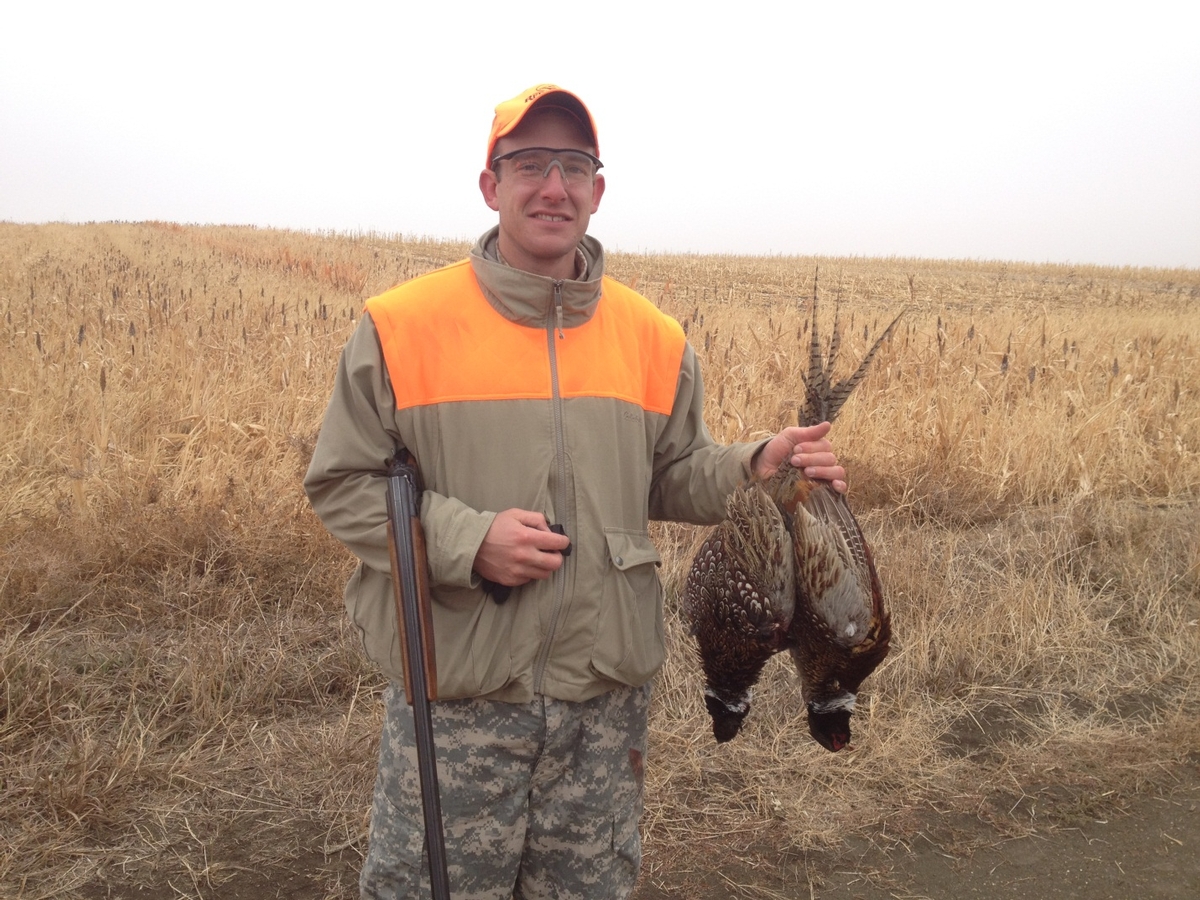 (Kurt with his double while blocking)

It only took us one walk after lunch to find our limit of roosters and then it was back to the lodge to put our feet up and enjoy the rest of the day.

The next day started about the same. Hearty breakfast, check, multiple cups of coffee, check, some clay pigeon busting, check. Once again the weather was a bit overcast as well, but that didn’t seem to stop the birds from flushing up in front of us all morning. We hunted near the sanctuary area again on some different property but didn’t need to take the dogs through it because the birds were spread all over in the food plots that day. We were only averaging about a handful of roosters each push we made but before long we were nearing our limit. Fortunately, these boys came prepared with good shooting ability. There were very few birds that got up within shotgun range and lived to warn the others. We were seeing a really good crop of hens get up in front of us each strip we walked which kept us on our toes as we had to identify hen or rooster constantly. 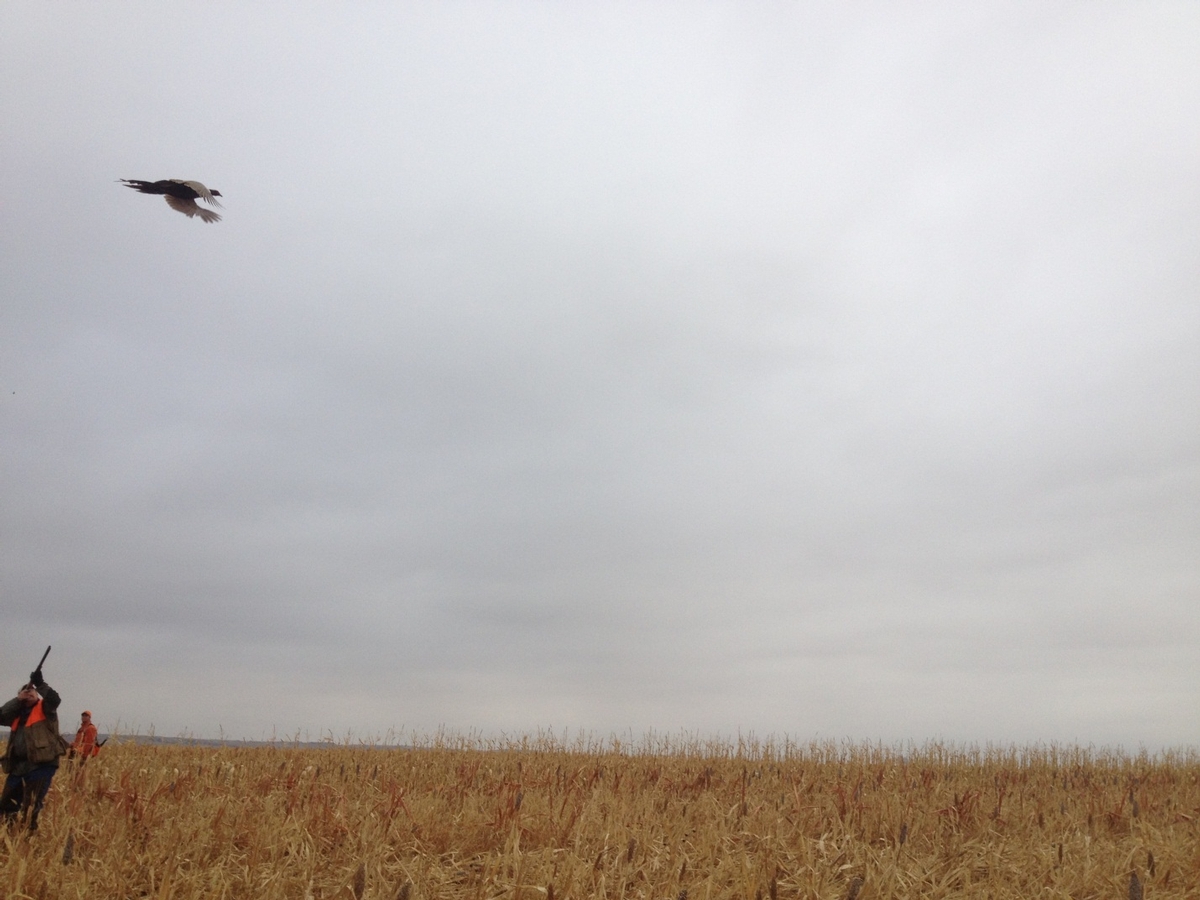 (John taking aim at a rooster)

The second day of hunting we were done and limited out shortly after the noon hour. Once we came back to the lodge we were able to take our hunting gear off and fill up on all the great food the gals in the kitchen had cooked up for us. Coming back to the lodge after a good day of hunting to be greeted by the sweet aroma of fresh cookies and warm soup and sandwiches is a nice way to cap of a great day.

As I had mentioned before, the first year Jeff and Kurt were here we had the chance to sneak up on a grouse. That was quite the treat because grouse here are few and far between and to get one within shotgun range is somewhat of a rarity. Since the first year they were out we had tried and tried to replicate the good luck by going out after the hunt for some grouse or prairie chickens. Each year we would walk and walk until sundown in search of some of those wily little grouse but would only find sore legs and empty bird pouches at the end of each attempt.

Of course this year was no different. Not all of the guys were up for the challenge, but Kurt, Dan, Jeff, Ben, and I were dead set on trying to get another grouse to end our streak of failed attempts in the past.  After the hunt on the second day we set out just before dusk to try and catch them coming in from their eating grounds. 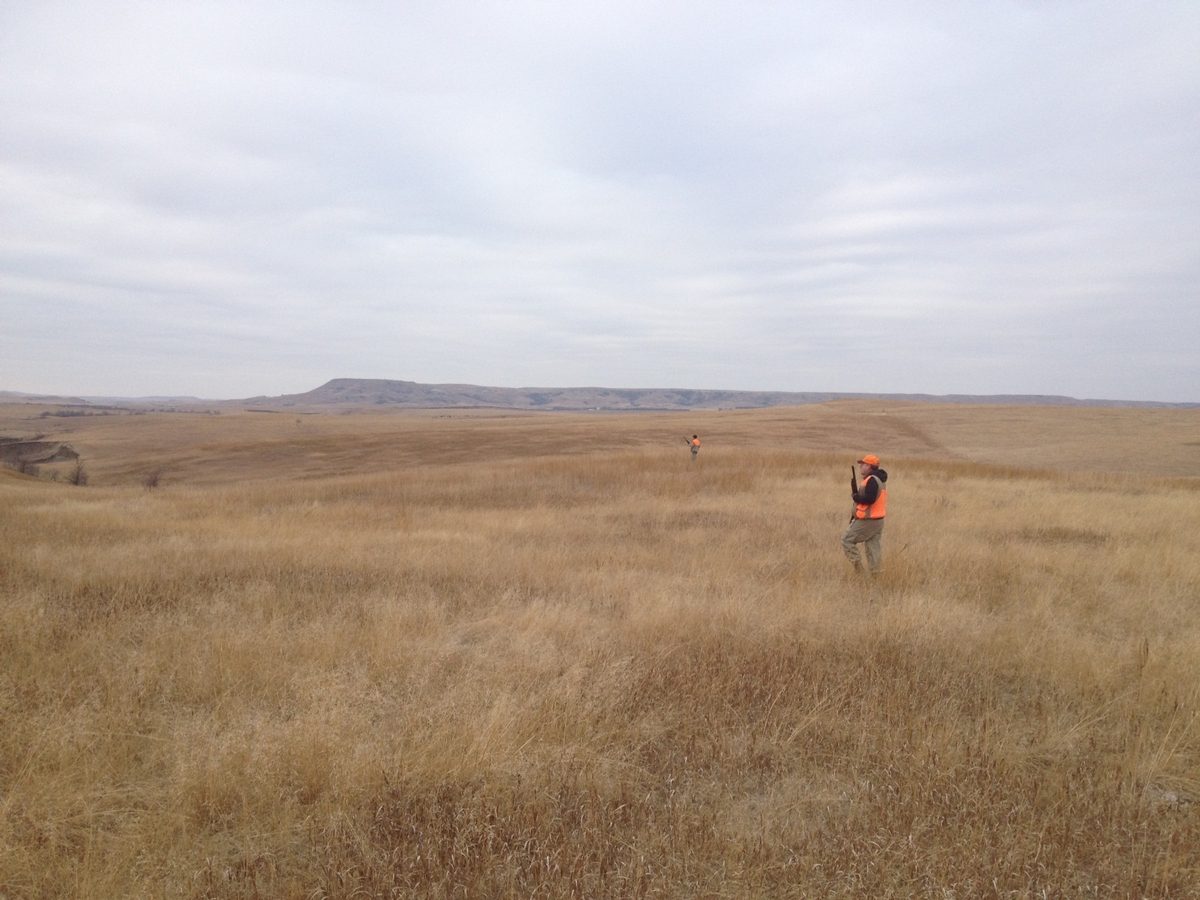 We did end up seeing a big covey of them get up about 100 yards ahead of us and fly off. Seeing that was a morale booster because now we know that they were still in the area and maybe we would get a second shot at them later on. As we kept walking we had a few get up a bit closer to us but by the time the guns met the shoulders the birds were well out of gun range. It’s amazing how fast they can get up and get going! Needless to say we were skunked again after walking a few miles in some rough terrain. So we tucked tail and headed back to the lodge to lick our wounds and get some great food in us once again.

The third day of hunting brought on our first bit of sunshine in the afternoon that we had been looking forward to. The morning hunt started out somewhat slow. We came into lunch at noon with only half of our limit. During the course of the hunt we kept noticing that a large group of birds had been flying in and out of a large CRP patch near where we were hunting. We made a plan to walk the grass but the dogs were a bit winded from the hunting in the morning so we decided to push the grass with fresh legs and full stomachs after lunch. What a great idea that had turned out to be! Within about 10 feet of starting the grass we already had a bird down. Then another, and another had fallen. There were quite a few waves of getting up way ahead of us all throughout the push. The grass was a very rooster-rich environment which is just what we needed. When all the dust settled, there were 11 dead roosters to add to the pile! 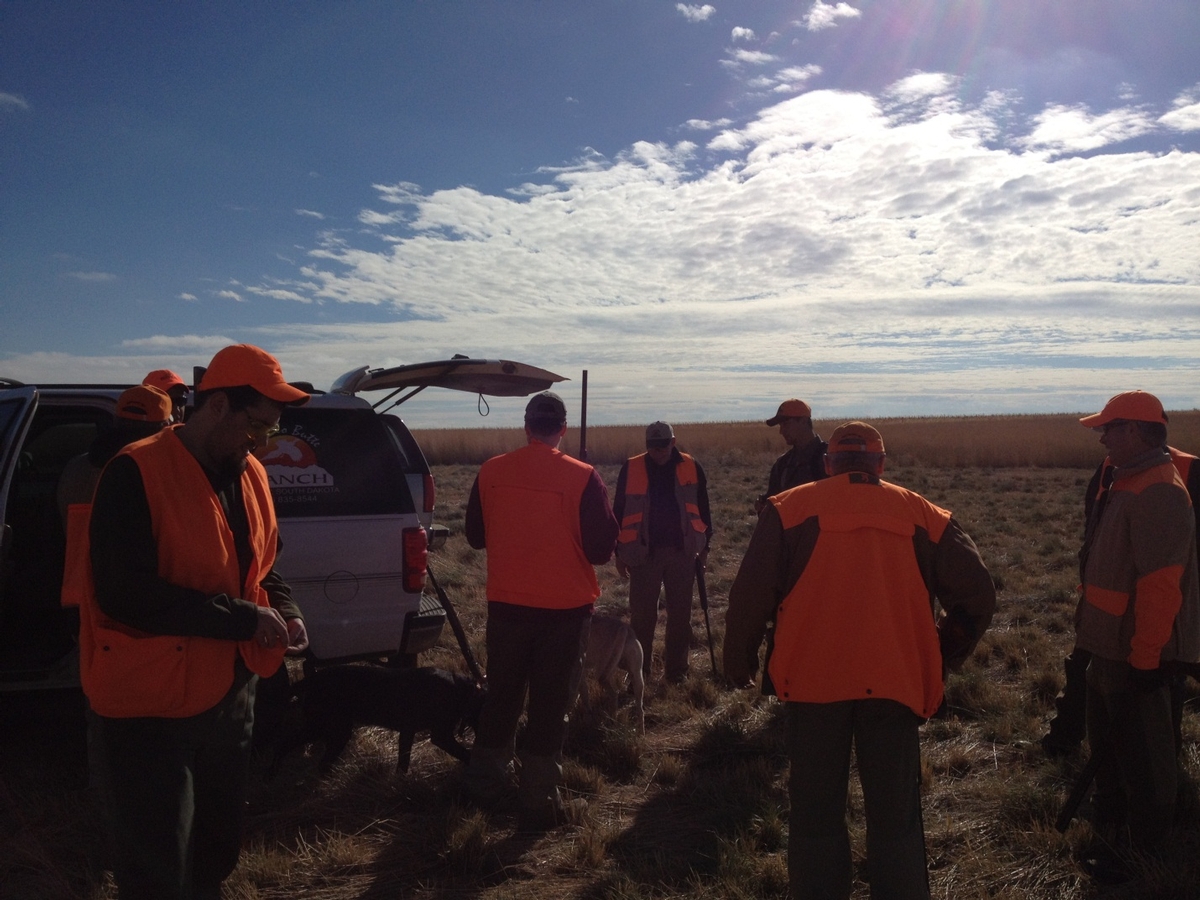 After the hunt we all went back to the lodge for more pictures and relaxation on the deck now that the sun was out in full force. But a few of us geared up to head back out and track down some grouse. The weather was perfect and expectations were running high. After walking about a mile without seeing anything, we decided to cross a windy creek and walk the other side back. This turned out to be a decision that would get us closer than we had expected to getting some shots at those quick critters! Kurt was first to spot on sitting up in a tree so he snuck up closer to it to get a shot off. Finally, 3 year long streak of bad luck had come to an end!

Before we even had a chance to do much celebrating and high-fiving, Ben and Dan noticed two more flying in! They kneeled down in the cover and got a few shots off as they flew over. Another one went down. This time it turned out that it was a prairie chicken that flew too close to us and met its demise. The walk back had us in pretty high spirits because not only did we go out and end our unlucky streak, but we came back with two of the trickiest birds to hunt around the area. 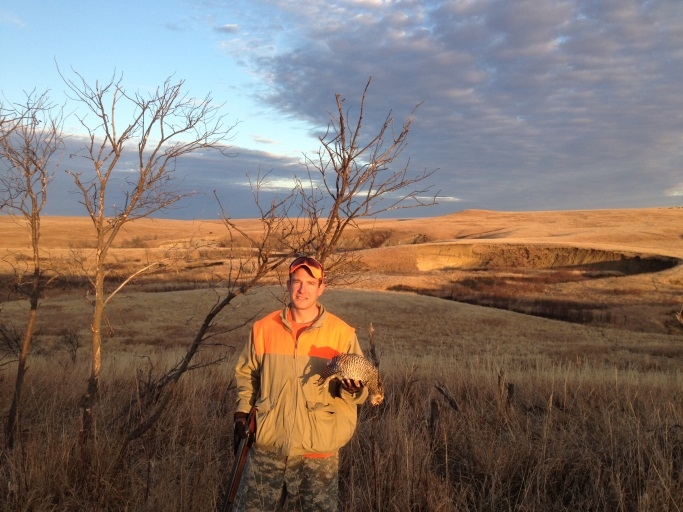 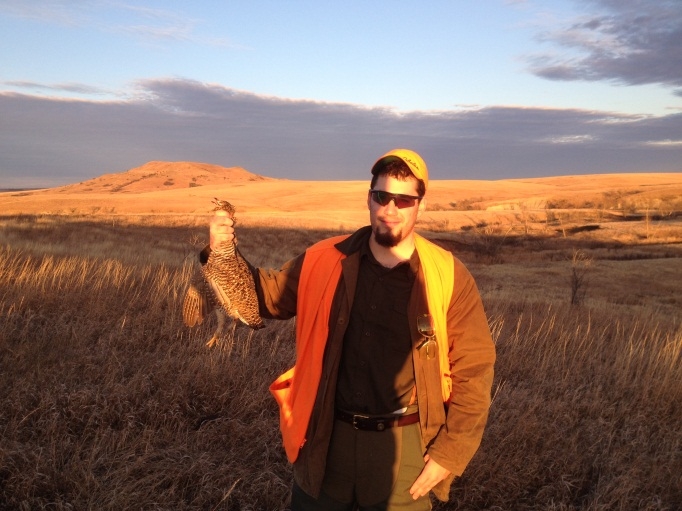 (Kurt and Dan with a grouse and prairie chicken)

Coming back to the lodge with these in the bag was purely an amazing way to cap off a truly fantastic few days of hunting some South Dakota Ringnecks. It seemed like the last few days flew by so quickly but the memories forged here will last us until the next year when they return. I am so grateful to be in a business where I get to meet such wonderful people from all over the country. If I could summarize how I feel that these guys chose us to hunt with in one word it would be “honored.” I truly feel honored to have met and made relationships with these guys during their stay here. It goes without saying that all of us here and Buffalo Butte Ranch and Buffalo Butte are already looking forward to their return.